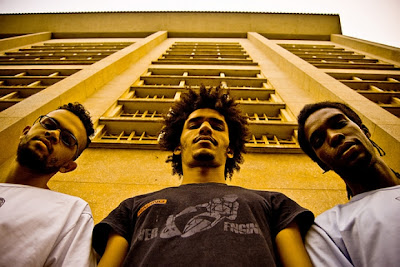 Another greeting from Brazil - Macaco Bong! Monkey bong if you will. This musician trio of Bruno Kayapy, Ynaia Benthroldo and Gabriel Murilo was shown to me by Felipe Arcazas. Much kudos to him, I have found a few of my new favorite songs! These guys play instrumental rock with a spice of experimental. Overall really warm sounds and groovy vibes, you can practically feel the rhythm of Brazil in there. Other times it turns pretty schizophrenic and messed up, but always under great control by the driving force of the band - guitarist Bruno Kayapy.

Since 2005 there have been 1 EP and 2 full-length albums released. The band participated in numerous events and have made it self a name back in Brazil. Turns out they are highly referenced there because of their sound. And now the band is planning to join up forces with another experimental band that Bruno produced the album for, The Skrotes, who mix styles like samba, drum n' bass, punk, jazz, classical and metal. Both of them are planning to tour the country and promise to present their music in a whole different viewpoint, mixing all of it together and coming up with some new stuff. Stuff that should also make the new album, so be prepared.

Ok, so without any further adieu, here's Macaco Bong:
http://www.youtube.com/watch?v=ehio0atqemo (!!!)