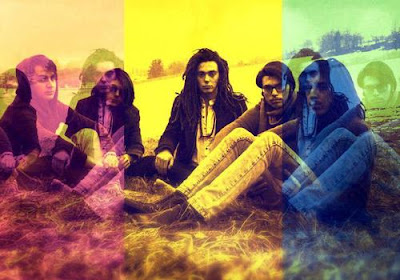 Italy has its own weird relationship with music. Or is it me that has weird relationship with Italy? To be honest - the Italian bands that I find interesting can be counted on the fingers of one hand (feel free to correct me in the comments). Thankfully there's another band that made the list. Tangerine Stoned was formed in mid 2011 to bring us some tastes of 60's psychedelia. And you can hear The Doors, Frank Zappa, some Pink Floyd in there as soon as you turn their first and currently the only album on. So one thing you have to get over is - yes, it does sound a lot like the Doors. But the overall execution is quite nice, plus guys throw in some variety to it. I've found the "L'Urlo della Strega" track to be really laid back and quite original, and maybe the band should explore that direction. Oh and that ending keys solo on Dirty Ceiling is just something.

Overall I can say that they have a pretty cool psychedelic sound, musically it all sounds on spot. So guys are definitely good musicians. Definitely a something to check out on a sunny day. One thing they should do though, is try and find something more of their own, because frankly I can't stop thinking to myself: "Call me a damn ass-goblin if they don't sound too much like The Doors". That kind of keeps you from really enjoying the music and diving into it. Will have to return to them by their next release and see where they've taken it!

The band is getting ready to tour the Europe, so check 'em out, see if you'd go see them live: