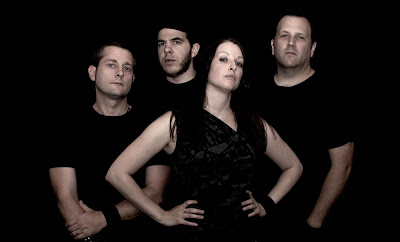 It's been a while without some decent doom! And in the moment of need it found me on it's own. Ladies and gentlemen, here's a fresh doom from Boston, Massachusetts - Second Grave. The band formed in 2012 as Gein on bass, Chuck Ferreira on drums, Chris Drzal on guitar and Krista Van Guilder on vocals and guitar (!). They've managed to record their debut album that same year. No surprise since all of the band members are experienced musicians who have participated/participate in such acts as Black Pyramid, Obsidian Halo, Dahlia's Dead, Warhorse and others.

I would like to mention separately, that the band's forntman, or should I say frontwoman, has a gorgeous voice. Those rock bands with female vocals ain't too much of an widespread phenomenon, and rock bands with great female vocals are so much more rare. I take my hat off and say that this is the case. She really doesn't go over the line of what she can perfectly pull off, and what she can pull off sounds great as is.  The band plays the sort of classic style of doom with the dark aura and literature topics. The production on the record is pretty good. Can't say that the musical part is exceptional but it manages to keep attention some 70% of the time. There are some really good tracks, like 'Covet', the instrumental track 'Salvation' and 'Soul Extinction', and there are the less inspired tracks that frankly seemed kind of repetitive and monotonous on both vocals and music. But I must say, that the band does have that something that makes them work. They probably need to spend some more time together writing songs and, hopefully, next album will bring us more of the doom awesomeness!

The band is non the less good, and that 'Covet' track I just fell in love with.
Go on and listen, support and make sacrifices: