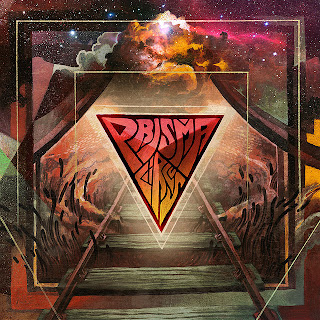 I wanted to review this band for a while now, and when you'll hear them, you'll know why. Warm welcomes to you from Barcelona heavy psych trio Prisma Circus! The band first formed as a duet of Alex Carmona Blanco on drums and Joaquin Escudero Arce on bass/vox in the late 2010 and started their work on songs, was later joined by a brilliant guitarist Oscar Garcia Albizu. The line-up stayed the same to this day. And isn't it a great one? Fluent and funky psychedelic rhythms, tones full of fuzz and wah, cool beats and damn nice vox. It all mashes up into an outstanding mix of spacey psychedelia, that sounds to be influenced by many great 60's and 70's rock artists. With all the interesting and pretty original moves they manage to make you swirl in the sound. Really sunny and summery!

Prisma Circus released an 4-track EP in 2012 and is now almost finished on their first full-length album! Even more of a reason to mention them. I will be reviewing the new album as soon as I get my hands on it. For now, all of you Hendrix, Floyd, Astra and blues-rock admirers - you'll love what follows: