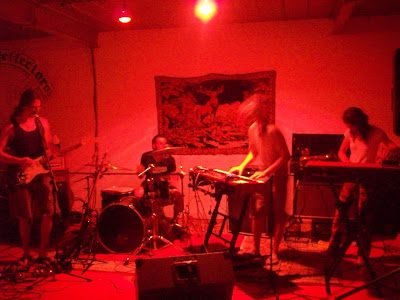 Hey there guys! As I've promised, here comes a post to brighten up the Monday morning with mellow and sometimes crazy tunes. Today's topic is an interesting and rather original experimental psychedelic rock band from Chicago. Crown Larks were formed in 2012 and since have released an album. Their sound ranges from spacey jams to funky jazzy parts to quiet acoustic mellow moments. And as I am fool for sax in psych music, I can't not mention the nice feel it adds to it. So together it all creates some nice moods, that sometimes even have this homely-cozy tinge to them. Take for example 'Aquarium' or 'Blue Lobsters', that kind of make me crave to go out to the summerhouse, jump into the hammock and put this on while chilling with some nice book. It gives off that authentic old school psychedelic rock feel.

The band's sound is said to be inspired by such artists as Soft Machine, Rahsaan Roland Kirk, Galaxie 500, Boredoms, Syd Barrett, Moonrises, and CAVE. The bands album Catalytic Conversion is available through bandcamp on CD, tape cassette or as a name-your-price digital download. So dig in, psych lovers, this one is a really nice roll down your lane.