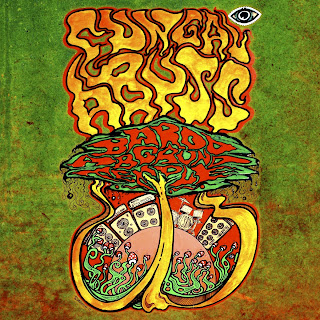 Good day. I finally had a good night sleep and am not practically shutting down on my keyboard. There is a big trip planned this weekend. Far into the countryside, with guitars, jembes and a thing to inspire... So in a light of this, I remembered this one band from Seattle. That band is Fungal Abyss. It is a fucking dimension of tripjam psychedelic rock. The music is pretty great as ambient setting or a meditative, crazy trip into the space of your mind. With tracks lengthy, spanning from 10 to almost 30 minutes. Their first album is claimed to be recorded under the influence of the psyclobe fungi and was entirely jammed, with no overdubs or edits made. Can't say that they are musical geniuses, but for all I know - they produce some pretty fucking outstanding jams, somewhat reminding me of Causa Sui, sometimes a more psyched-out Samsara Blues Experiment and similar. They're definitely something I'd see live.

Guys have released 2 albums so far, one of which I actually got on a fucking cassette tape, lol! And another one is on it's way. Shows aren't really frequent and are limited to Seattle, as far as I know. Well, that's what you get with underground bands. So go check 'em out on bandcamp and the tube, and go see them live if you're in Seattle... Do share about the live show though!