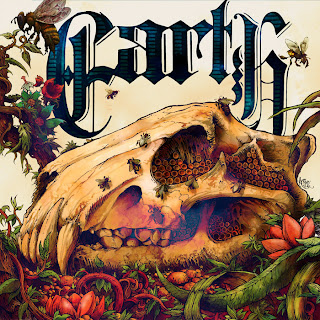 Good day, comrades! In case all of this time you've been hiding in a tank or some underground bunker, I would like to familiarize you with a legendary drone/doom/stoner band Earth. These guys can be called pioneers of the genre, and are named to be a major influence on SunnO))). But, unlike SunnO))), Earth make their music more sci-fi and positive, and it is mostly instrumental. Some times you get lost in those drones and transported to another planet, sometimes into a growing forest... I've found their music to be very suitable for programming work, as it sets this good trail of thought and concentration (which today I don't have for shit).

Earth started out in the 1989 and is led to this day by guitarist Dylan Carlson. The band changed quite a bit of members, but the lead always stayed the same. There was a split that lasted since 1998 to 2003, when the band reformed and continued on writing great stuff, and stayed true to the sound they do. The uniqueness of it is completed by the signature sound of a beautiful telecaster, deep and reverbed tones and the mix of some country, folk and jazz ideas in their music. A fun fact: on "Sunn Amps and Smashed Guitars" there is a demo track where Kurt Cobain does the vocals, who is also featured as a vocalist on the "Divine and Bright" and "Extra-Capsular Extraction", doing backing vocals on the track "A Bureaucratic Desire for Revenge".

So here's some music, comrades. My favorite album would be "And the Bees Made Honey in the Lion's Skull":