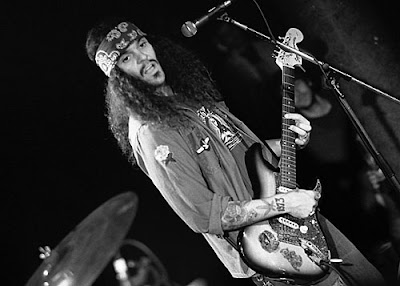 So hey everyone. This one I recently really got hooked on. A project by an ex-Kyuss drummer Brant Bjork. If you are looking for some proper desert chill-out moods - you found your thing. He does very awesome laid back stuff, with cool rhythms and hooks here and there. I must warn you though this music isn't really meant to be listened to on it's own. It's more of an awesome mood setter for parties or a general laid back background music. Should be pretty fucking good for a long drive in a car... Mmmmhh, yeah... Anyway, some of the stuff he does sounds pretty unique in a sense of the vibe you get. It's really positive and funky in that sense.

Brant formed the band and remains active with it since 1999 when he released the first album - "Jalamanta". This started him with his own sound, that you can hear the most in Kyuss amongst other bands he participated. And since then there were 7 solo albums and 2 albums of Brant Bjork and the Bros. All of the albums have some cool tracks to offer, with my personal favorites now being "Born to rock" and "Somewhere some woman". Yes in most of his work you can feel the lack of some spark, which was provided by Josh Homme  in Kyuss for instance, with whom they've wrote most of the music for the band, but yeah, those times are gone and those guys just really worked like magic together, really balancing each other out. Josh Homme isn't doing too good on his own with his band either in my opinion. Music wise...

So anyway, stay tuned and check some of this out: