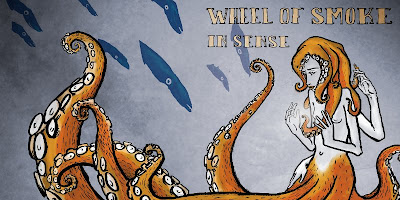 Ah, it's been a while! Just moved to a new place and currently staying without the interwebs. Yet still it is time for some new music. And this time we're heading prog space rock & post rock direction with a Belgium quartet Wheel of Smoke, a very nicely sounding piece with a bit of an melancholia and 70's occult aftertaste. And surely - I like how they're mentioning Carlos Castaneda as one of the influences. You can even hear that in the psychedelia and drug influence the music gives off. Other influences include bands like Black Sabbath, King Crimson, Hypnos 69 and some Pink Floyd in there too (I guess there's hardly a band in psychedelic rock scene that hasn't been influenced by Floyd).

The band was formed in 2005 and been playing a lot of gigs, so by now these guys do know what they are doing and do know how to deliver proper music on a level. Currently the line-up consists of Filip Remans and Erik Heyns on vocals and guitars, Jouk Opdebeeck (dude, I can't pronounce that!) on drums and Tristan Michiels on bass and vox. In 2011 it happened and they've released their first 5-track album "In Sense". The album turned out to be a sort of a journey musically. It really takes you places with the sounds ranging from beautiful post-rockish vibes to straight forward stoner rock slams with grungy vocals. For all I know - this is worth every minute spent and definitely worth re-listening.

Stay tuned because they are planning to release another effort in fall 2013, which I will be mentioning here when it's out! Keep yer' eyes n' ears open, lads!

You're still here? Well here's a whole bunch of links and videos to follow below: