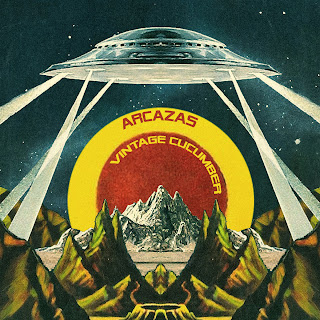 It's finally out! The split I've been waiting for. A split by Felipe Arcazas & Vintage Cucumber. And the first thing that caught the attention was the awesome cover of the album. And this is the case where it sounds exactly the way it looks - this is a very old school sounding album with a lot of spacey ambiance and sometimes surferish vibes.

The opening track "Carl Sagan" starts us on the journey, surfing through space and giving you the taste of things to come. I'd call it a sort of a lift off that takes you into outer space (Would also highly recommend read about Carl Sagan and watch his and other great people's collaborative documentary effort "Carl Sagan's Cosmos").
And here we are... Out in the space with a brilliant and liquid-flowing track "Lincos" (an abbreviation of the Latin phrase lingua cosmica). I find this to be the best track of Felipe on this album! Very mesmerizing and gentle. I like how vintage keyboards blend in here, adding this noir/jazzy feel to it. And the last solely Felipe's track on this album, "Arecibo", is like a soft and slow merge of his style and Vintage Cucumber's. It gently gets you ready for the next half of the album.

And we are on Vintage Cucumber side with "Hinter der grünen Tür". Vintage Cucumber, as always gets us with a more down-to-earth kind of sound, celebrating the landscapes and the flora. So I'd say, here we landed on another exo-planet and this is our familiarization with it. So now take out your surf boards and catch the wave with "Welig", only to find your self lying on the beach and staring at the stars... Damn, where the fuck did my surf board go?! Not again... Damn, it's getting kind of cold too. What's going on? Oh, I guess it's just some alien Sabbath. It's "Dreh hoch & Tauch ab" - the creepiest song off the album. Do like the vibes on this one, yet it gets quite a bit brighter pretty soon. I'd love to see it staying as creepy.

But it's on to the collaborative track by the guys. On to "Asa Vajda", which if I understand correctly is an interplay with Black Sunday movie from 1960. I guess this is the creepy track I've been waiting for. I like how it works with the previous track in that way. The riff and the tone on this one is also really worth mentioning as tasty!

So to sum it all up, it's a very interesting and inspiring album! Best album of this year's so far, I'd say. Great job, and I hope the guys will continue their collaboration! The album is available as a name-your-price download on bandcamp.